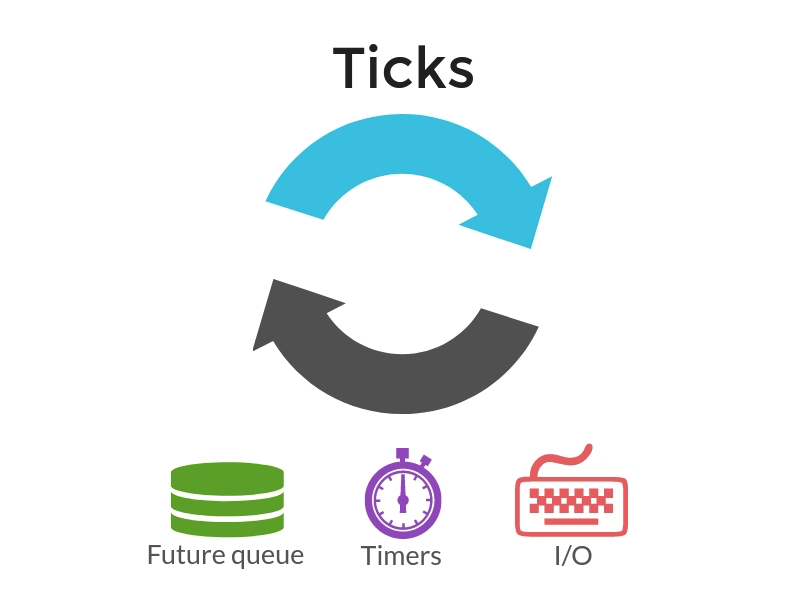 Tick is one loop iteration where every callback in the queues has been executed synchronously and in order. ReactPHP event loop implementation has a method to schedule a callback to be invoked on a future iteration of the event loop:

When being executed a callback receives an instance of the event loop as an argument.

Actually, FutureTickQueue is a wrapper over the SplQueue class. It is used to store and execute callbacks. You can add() a callback to the queue, check if the queue isEmpty() and execute them with tick().

In examples, I use StreamSelectLoop implementation of the LoopInterface, but there is no difference in ticks code between different event loop implementations. All implementations initialize queue in the constructor, have proxy methods to add callbacks to the queue and then execute these callbacks on each iteration.

When calling tick() on the FutureTickQueue instance it executes only those callbacks that were added before it started processing them:

To see this queue in action let’s try to schedule echoing a string:

A tick callback must be able to accept no arguments. So, if we want to access some variables within a callback we should bind them to a closure:

To see the queue in action and how it executes the scheduled callbacks let’s try to recursively schedule them.

Here is an interesting example to see the actual order of callbacks execution in the event loop. Here is the code:

Note that this example uses fopen() for simplicity and demo purposes only! This should not be used in a truly asynchronous application because the filesystem is inherently blocking and each call could potentially take several seconds. Read this tutorial in case you need to work asynchronously with the filesystem in ReactPHP ecosystem.

We are going to schedule two callbacks: with futureTick() and with addTimeout()and also we will perform some I/O operation. Before running this script try to guess the expected output…

Then run the script and see what happens:

You can see the actual order in which the callbacks were executed:

When the event loop runs it executes scheduled callbacks from the future tick queue, then timers and then the I/O callbacks:

Consider a tick as one loop iteration where every callback in the queues has been executed synchronously and in order. That means that a tick could be long, it could be short, but we want it to be as short as possible. So, don’t place long-running tasks in callbacks, because they will block the loop. When a tick a being stretched out, the event loop won’t be able to check the events, which means losing performance for your asynchronous code.

Callbacks that are scheduled with futureTick() are placed at the head of the event queue. They will be executed right after execution of the current execution context. The queue executes only those callbacks that were added before it started processing them.

Why do I need all of this? What is the use case for these ticks? Actually, ticks can be a solution to convert some synchronous to asynchronous code. We simply schedule a callback onto the next tick of the event loop. But, remember that an event loop runs in a single thread, so your callbacks are not going to run in parallel to other operations. We can simply delay some code to properly order how the operations run, for example when waiting for the events to bind to a new object. Unlike timers, tick callbacks are guaranteed to be executed in the order they are enqueued.