When we run the loop, the application starts execution of the asynchronous operations. The execution runs endlessly, until we call $loop->stop() to stop it or terminate the script itself.

In our case, the Set up the world step looks the following:

At first, let’s create a very simple Hello world server to understand how it works:

The main logic of the server is placed in the callback, which is passed to the server constructor. This callback is being executed for each incoming request. It accepts an instance of the Request object and returns Response object. The Response class constructor accepts the response code, headers and the body of the response. In our case, for each request, we return the same static string Hello world.

If we execute this script it will run endlessly. The server is working and is listening to the incoming requests. If we now open 127.0.0.1:8000 in the browser we will see our Hello world response. Nice!

Now, we can try something more interesting. For example, we can use Filesystem component and open file bunny.mp4 (you can download it from the Github) in a read mode and then provide its stream as a response body.

We open the file in a read mode and receive its stream. Then this stream is used as a response body. We also have changed Content-Type header to video/mp4 to notify our browser that we are sending a video in the response. There is no need to specify a Content-Length header because behind the scenes ReactPHP will automatically use chunked transfer encoding and send the respective header Transfer-Encoding: chunked.

Now refresh the browser and watch the streaming video:

Really cool! We have a streaming video server with several lines of code!

Now instead of returning Response object we return a promise that resolves with this object. Why? We are dealing with a filesystem which is definitely slow. When it takes some time for the request to be processed (often more than 1ms) it should be wrapped into a promise. This prevents the server from slowing down.

On the next step, we can improve a little our server. Let’s say that a user can specify in the query string a file name to be streamed. For example, when users type in the browser: http://127.0.0.1:8000/?video=bunny.mpg the server starts streaming file bunny.mpg. We will store our files for streaming in media directory. Now we need somehow to get the query parameters from the request. Request object that we receive in the request handler has method getQueryParams which returns an array of the GET query, similar to global variable $_GET:

Now to view bunny.mpg video, we can visit http://127.0.0.1:8000?video=bunny.mp4 in the browser. The server checks the incoming request for GET parameters. If it finds video parameter we assume that it is a video file name, which user wants to be streamed. Then we build a path to this file, open it in a readable mode and pass its stream to the response. But there are two issues here. Do you see them?

Before opening a file and creating a stream we should check if this file exists on the server. If not we simply return 404 response:

This code looks a bit complex because we have to sequence calls to the filesystem. At first we check the file existence and only then we open it and send a response. Method exists() return a promise that resolves if the file exists, otherwise it rejects. We add two handlers to this promise. The first one is being called if the requested file exists, so we open it and return a response. The second handler returns a 404 response.

Now our server doesn’t crash when a user requests a wrong file. It responds with a correct message:

But these nested promises don’t look nice, let’s fix it. $file->open('r') call returns a promise that resolves with an instance of a readable stream. Instead of working with this promise we can extract a stream from it. Replace one then block with a helper function \React\Promise\Stream\unwrapReadable(). This function returns a readable stream, which acts as a proxy for the future promise resolution:

Allowing to request only certain files

But still, there is an issue with requesting files. A user can request any file on the server. For example, if our server code is located in server.php file and we check this URL in the browser http://127.0.0.1:8000/?video=../server.php the result will be the following: 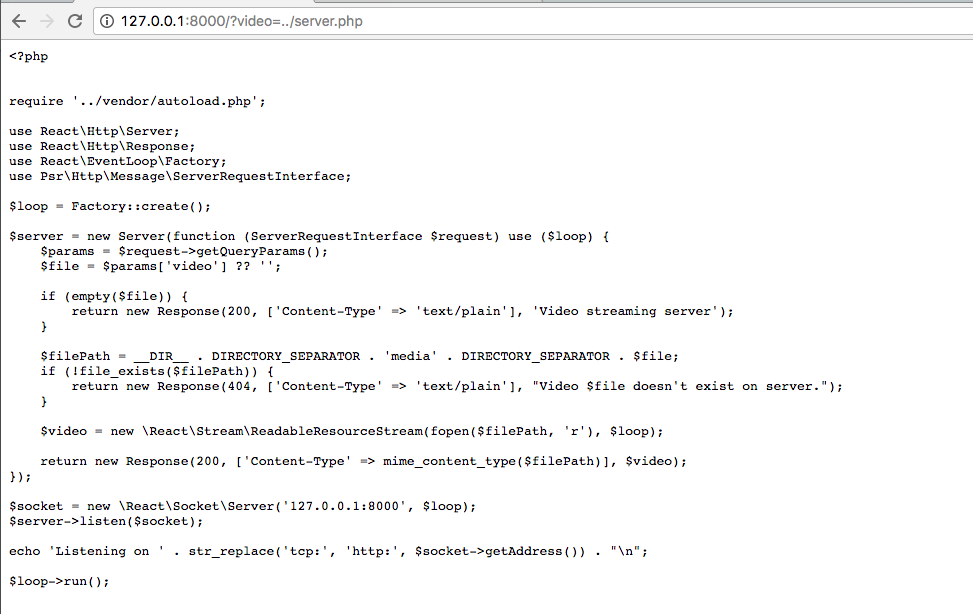 Not very secure… To fix it, we can use basename function to grab only the file name from the request and cut out the path if it was specified:

Now for the same URL we will receive 404 page. Fixed.

Actually, the server is ready, but the main logic, which is placed in the request handler doesn’t look very nice. Of course, if you are not going to change or extend it, you can keep it as it is, right in a callback. But if the server logic is going to change, for example instead of a plain text we would like to render some HTML pages this callback will grow and very soon it will become hard to understand and maintain. Let’s make some refactoring and extract this logic into its own VideoStreaming class. To be able to use this class as a callable request handler we should implement a magic __invoke() method in it. And then we can simply pass an instance of this class as a callback to the Server constructor:

Now we can start building VideoStreaming class. It requires a single dependency - an instance of the FilesystemInterface which will be injected through the constructor. At first, we can simply copy-and-paste the code from a request callback into the __invoke() method and then start refactoring it:

Next, we can refactor this __invoke method. Let’s figure out what is happening here:

So, it looks like we can extract two methods here:

The first getFilePath is very simple. We receive request parameters with $request->getQueryParams() method. Then if there is no file key there we simply return null, which means that a user has opened the server without any GET parameters. In this case, we could show a static page or something like this. Now we return a simple plain text message Video streaming server. If a user has specified file in GET request we create a path to this file and return it:

Method makeResponseFromFile() will be also very simple. If there is no file for the given path we immediately return a 404 response. Otherwise, we open this file, receive its readable stream and return it as a response body:

Here is a full code of the VideoStreaming class:

Of course, instead of a simple request handler callback now we have 3 times more code, but if this code is going to be changed in the future it will be much easier to make these changes.

If you are interested in ReactPHP watch this conference talk by Christian Lück where he explains the main ideas behind ReactPHP.